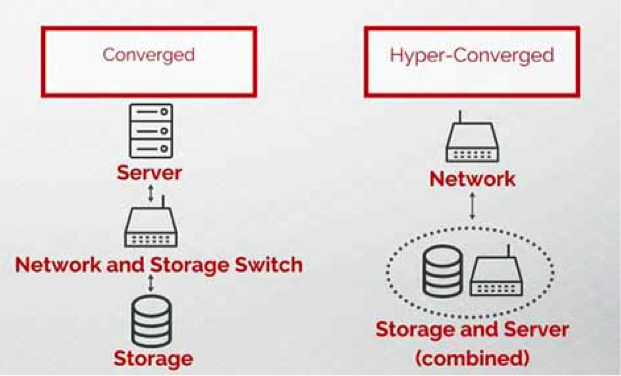 Hyper-Converged vs. Converged Infrastructure will be discussed in this blog. What does it mean when people talk about convergence in technology? In layman’s terms, it’s a system that performs one or more business tasks by combining computing, storage, and networking technologies — whether or not they were previously linked. IT has become inseparable from the internet, telecommunications, media, and consumer electronics due to three decades of continuous technological convergence.

Infrastructure that is both converged and hyper-converged has certain advantages and disadvantages. In both spaces, we examine several systems.

When constructing a converged infrastructure in a business setting, it’s not enough to replace a few network devices. To do this, a company’s network infrastructure and the types of IT personnel required to support it must be seen entirely differently.

For a long time, the traditional IT infrastructure was composed of separate systems for each kind of technology. Experts in networking, storage, systems administration, and software administration were among those present. There have been many changes since virtualization emerged as an effective technique for connecting networks and servers.

Virtual worlds nowadays are comparable to the all-pervasive smartphones of yesteryear. Smartphone users seldom think about storage or system administration since they need an app to accomplish their goals. For example, EMC’s VMAX family director of product marketing Colin Gallagher notes that storage management on converged infrastructure systems, such as the VMAX family, is provided basically like an app.

In general, businesses may create a converged infrastructure in one of two ways:

What sets convergent infrastructure apart from other options is that it separates each component to be used for its intended purpose. For example, the server can be taken apart and used as a standalone server, or the storage may be detached and used as functional storage. Technology is software-defined in a hyper-converged infrastructure, which means it is fully integrated and cannot be split down into individual components.

Modern multi-cloud solutions, which allow IT administration from a single interface with reduced operating expenses, more excellent performance for all applications, better data governance, and no vendor lock-in, personify convergence in IT in businesses. With a Hyperconverged Infrastructure (HCI), data centers may move from being “cost centers” to becoming sources of income, innovation, and business value.

Business leaders now expect IT to have fewer moving pieces while providing users with the same or more resources. As a consequence of this need, there has been a shift:

It is no longer necessary for physical servers and storage to be paired.

• Virtual machines and a single storage controller should have a many-to-one connection.

On the other hand, virtualizing workloads has the drawback of increasing storage needs, which may lead to massive amounts of duplicated data. As a consequence, resources are squandered, including time, effort, and person-hours.

Converged infrastructure (CI) is a blessing in disguise since it solves these issues. Streamlining procedures and improving performance are both possible when workloads are combined.

CI was revolutionary in the field of data center management. Even so, it’s constantly changing and becoming better.

Modular appliances built on commodity x86 hardware will combine compute, storage area network (SAN), and object storage capabilities in the next generation of CI. Adding more appliance nodes will allow you to expand this setup even further.

When used as part of a single-vendor solution, CI saves customers money by:

Hyperconverged infrastructure is the next step in this process. Design, delivery, and support are all handled by one vendor, making HCI the most excellent value by far.

The simplest method to tell the difference between CI and HCI is to look for these characteristics.

• A hardware-focused, building-block approach is utilized in converged architecture.

Building blocks make up CI. Each of these building blocks has separate components, which may be utilized for its intended function by itself. The server may thus be used just as a server, for example. With HCI, the technology is software-defined. The technology is fully integrated, which implies that it cannot be split down into individual components.

A critical distinction between converged and hyper-converged infrastructure is using hardware-based building blocks vs. software-based software-defined architecture. A piece of software determines the latter.

Because of this, HCI is superior to CI in terms of agility, maneuverability, and scalability.

CI and HCI differ in that CI uses a rack system, whereas HCI does not. In contrast to HCI, which comprises 1U or 2U (rack-unit) systems that combine one or more multi-core servers with a local storage array, CI is a massive, rack-scale platform.

Architecture differs between the two ways of looking at things. HCI architecture “has a storage controller function that operates in the cluster as a service on every node,” as stated by BMC. The converged architecture storage is connected to the physical server directly through BMC.

The difference between HCI and CI is that HCI makes storage available to all compute nodes and virtual machines (VMs).

• Keep in mind that HCI is not a replacement for CI. Each of these innovations has its own set of advantages.

Which is better for companies: CI or HCI?

In the end, HCI is much more adaptable, maneuverable, and scalable, resulting in a quick and easy deployment approach.