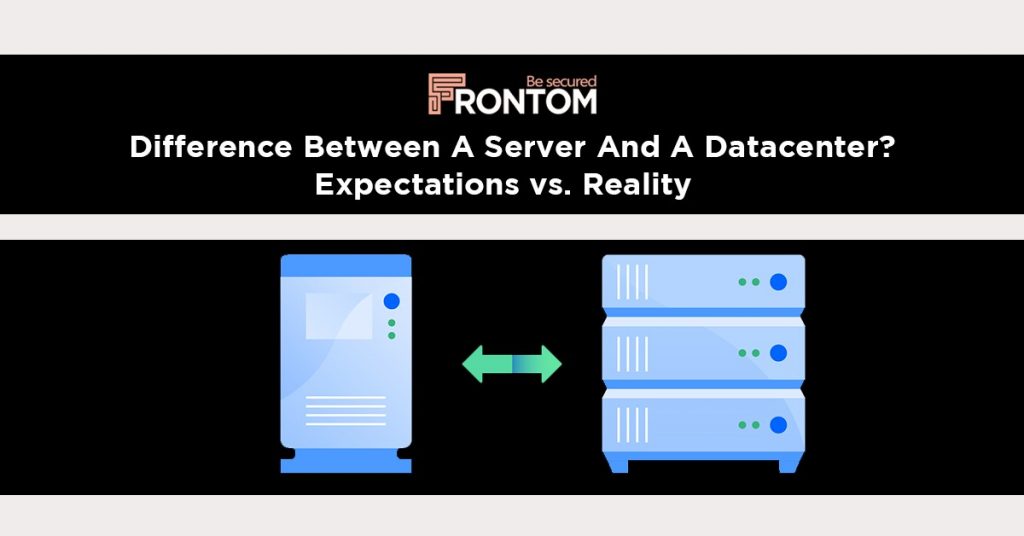 Difference Between A Server And A Data Center?

Before starting the debate on the difference between a server and a data center, we must know, what are these terms exactly. So, let us start!

Introduction to a Server

It is designed in a way to provide pathways for the clients and hence create a bridge between the existing user and the global internet world. This type of system is called a client-computer system and is most commonly implemented in a protocol environment. It is deployed and implemented using hardware and software.

Introduction to a Data Center

Large enterprises and organizations have separate facilities for data centers and use them to store their data. Traditional data centers are often quite challenging to manage.

Difference Between A Data Center And A Server

No, we are moving to discuss the major difference between a server and a data center.

The terms data center and server are often mixed and confused when people talk about them together. They are completely different from each other in various ways. The major reason that breeds confusion is linking the word ‘data’ with both of them.

This is true as both server and a data center are responsible for storing and manipulating data. Hence, people are often confused. But some major differences make data centers and servers different. The significant differences between a data center and a server are explained below:

A data center is mainly built for high organizations and enterprises. It requires large-scale industries. Moreover, it is capable of storing large amounts of data. Hence, it is mainly used by IT teams that deal with such aspects. On the other hand, Servers are required for small-scale companies whose data storage capabilities and requirements are less. They need small-scale integration of data reserves. A data center should be the primitive option when dealing with large enterprises.

The Anatomy of Nodes

The major difference between a server and a data center is THIS!

A server runs on a single node, while a data center has the capabilities to run multiple nodes at a single. The operational power of a data center is far more than that of a server. When the network traffic increases, it can cause issues in terms of the speed and efficacy of the system. Hence it should be seen when to use what functionality. On the other hand, a data center can handle traffic issues due to multi-node systems.

A data center is more scalable than a server when it comes to storing and manipulating data quickly, and due to its large scale and speed, it is an easy option for companies. However, it cannot be manipulated afterward. On the other hand, a server is far more reliable when it comes to communication between clients but is not that much of a scalable option than a data center.

The management of a server is easy. It can help the network and the system enjoy a seamless workflow. A server runs on a single system and stores a reasonable amount of data. Due to its single-node architecture, it is an easier entity to manage. While a data center, no matter how fast and huge, has an architecture built in such a way that disaster protection. Truly speaking, management can quickly become a troublesome task. Therefore, a server is a far better option when it comes to managing an entity.

When it comes to downtime and availability of the resources, it is paramount the resources are provided all the time, and hence a downtime can cause loss which could be irreversible. Downtime on a server is a far more common threat when it is compared to a data center.

However, they can be easily managed and fixed. Downtime in a data center is not that common. But when it happens, it is an intricate process and can cause many problems dealing with them.  So, this is the difference between a server and a data center!

Advantages of A Data Center

Cons of A Data Center

Advantages of A Server

Cons of A Server

A data center is a need of enterprises nowadays, and even though cloud computing has affected its market, it still is significantly in demand. It will only increase in the future. Due to this, it can be easily said that a data center and a server are alike and also very different on their own. An, they should be dealt with in their respective manners.