Data Center Cooling: What You Should Know About It?

The main purpose of data center cooling technology is to sustain environmental conditions in a way that is suitable to ITE operations. Data Center Cooling is one of the most extensively discussed topics in the technology sector. Even, the ongoing debate about the growing divergence between modern wide-scale facilities and older data centers has given a boost to its rapid growth. However, regardless of the newly developed facilities or the age, the efficiency of data centers and their power utilization are critical.

These deployed data centers almost consume about 3 percent of the world’s electricity. These data centers consume a hefty portion of electricity and with the advancement of hyper-scale services; the power usage is most likely to increase in the coming time. An organization’s sole responsibility is to first estimate power requirements before shifting any resources into data centers.

It is a lot cheaper to deploy less number of imperative units rather than installing powerful servers in high-density cabinets. The electrical system of data centers must also include a backup plan just like a UPS or backup generator to provide enough power to keep it functioning in case of a power failure. Most data centers integrate multiple electrical feeds to keep the entire computing equipment running. These centers have defined the power distribution they can supply per cabinet. However, the lower need-based companies might not be worried about these power limits but still; they must beware that the company’s power requirements could rise over time.

The very first techniques used a computer room air handler infrastructure (CRAH) or a combination of raised floors and a computer room air conditioner (CRAC). Both of these units pressurize the remaining space under the raised surface and shove cold air into the server intakes with the help of perforated tiles. The hot exhaust vents out after passing through the server components.

It is then returned to CRAH/CRAC units for cooling. The basic standard of both infrastructures is much similar to each other; the only difference is the removal of a compressor in a CRAH unit, which means overall it consumes less energy. High-density servers produce a great amount of heat making the server room much colder than the actual temperature limits. Whereas according to (ASHRAE), the average server inlets temperature should fall between 19 to 27 degrees Celsius.

The major concern of these units is the lack of fine-tuned control and are inefficient however; these units work well with small and lower requirement deployments. For this problem, most facilities adopted hot and cold aisles to physically separate the cold air for the server intakes from the hot air vented out from the exhaust. This solution improves efficiency by ensuring that the overall temperature of the environment remains normal.

Data centers operated by the private sector often fail to maintain their efficiency. The lack of efficiency is mainly related to their cooling systems. It becomes hard for them to improve their structure for reducing cooling demands. Power density’s rapid growth has attracted many companies to show high interest in new cooling technologies. Just to have control over the computing power of next-generation processors.

The innovation of the application (predictive analysis) has helped multiple data centers to generate massive information reports about their cooling and power demands. The colocation customers use the newly introduced facilities that enable monitoring server and network presentation in real-time. Data turned into usage patterns and models have helped them to manage their data center cooling and power requirements. Here is a list of common and newly introduced data center cooling technologies: 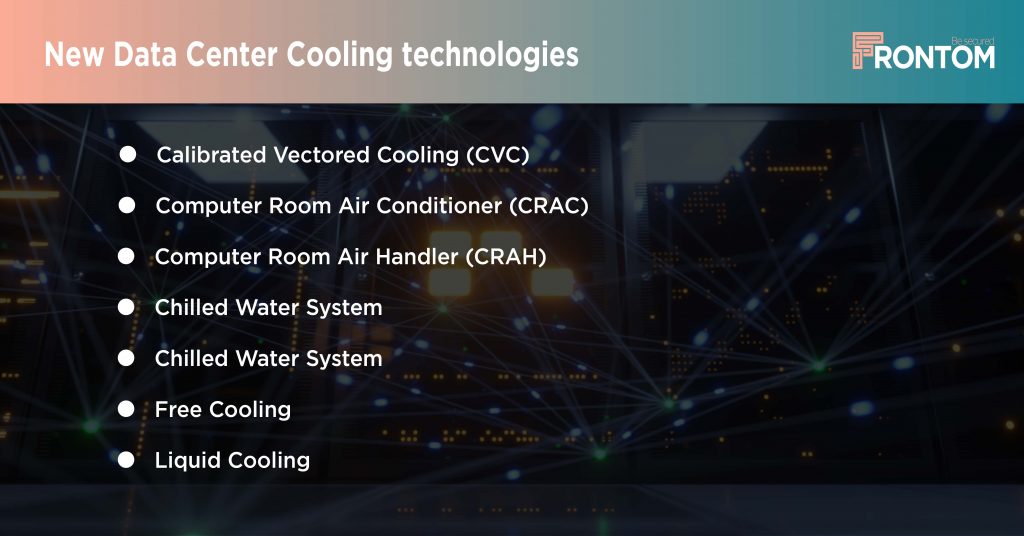 This technology adjusts the airflow track through the machining facility. It allows the cooling system to handle heat more efficiently. Calibrated Vectored cooling technique is made precisely for high-density servers.

CRAC is the common feature of any data center that is extremely similar to AC conditioners. A compressor powers the Computer Room Air conditioner. They are very much inefficient because of their energy usage however; the equipment itself is not expensive.

In the CRAH unit, cool water flows inside the unit via a cooling coil. It then modulates the fans to remove the air from outside the system. CRAH units are significantly more effective as they operate by chilling the external air instead of using a compressor.

An evaporative cooling system handles the rise and down of temperature by exposing hot air to water. This phenomenon powers the water to get evaporated, ultimately helping in pulling the heat out of the air. This system requires a lot of water because it does not operate on CRAH or CRAC units, which makes it more energy efficient. These evaporations and transfer of heat to the outside atmosphere take place because of data center towers.

Free cooling is only suitable for some certain climates. The outside atmosphere introduces cool air into the servers rather than chilling the same air repeatedly. This sort of cooling is the best energy-efficient form of server cooling

The latest generation technique has shown promising results in cooling. This cooling system is more scalable and cleaner than the air cooling system. It requires a lot of power and introduces pollutants to data centers. The liquid is exposed to server components in this system. Liquid cooling is further subdivided into two methods: Immersion and Direct to chip

The modern generation machine learning AI and complex data sets will require huge energy demands. As a result, significant amounts of heat will be produced. The continuous growth of power demand will lead to the development of more data center cooling technologies to keep the work functioning at peak capacity. The efficiency of both data cooling and power demands will always be a key concern for data centers in the modern and future eras.